You know how to use binary to represent numbers, but up until now you might only have used positive numbers.

How do we use binary to represent binary numbers?

To understand negative numbers in binary, you need to know about number overflow, and for that we need to look at some patterns in how binary numbers work.

For example let's look at the denary numbers 1, 3, 7, 15... These are all numbers which are one less than an exact power of 2. If we write down the binary values they follow a pattern: 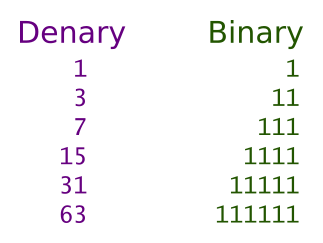 Every number which is one less than a power of 2 is made up entirely of ones.

What happens if we add one to each of these numbers is also interesting:

Now consider the number 11111111 binary (255 denary). This is the largest number that can be stored in a single byte. What happens if we add one to it?

This is called overflow, which means that a number gets too big and wraps around to zero.

{{% orange-note %}} Overflow is not an error, it is how things are supposed to work in a computer.

However, overflow can cause errors if you don't take it into account when you are programming. Most languages allow you to choose whether an integer is stored as a byte, or 16 bit word, or 32 bit word or larger. You must choose a size which is large enough to hold the biggest number your program will ever use. {{% /orange-note %}}

We will only talk about bytes for the rest of this topic, but the ideas can be easily extended to larger word sizes.

If we start with a byte value of 0, and keep counting up, we eventually reach a count of 255. If we count one more we go back to 0 (this is a bit like a clock , it starts at 1, counts up to 12, then resets to 1 again). Here is an illustration, showing the binary values and equivalent denary values: 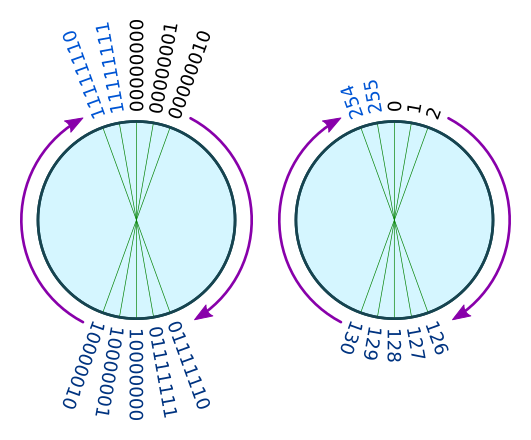 Starting at 0 we count up as follows:

Now we understand how overflow works, we can consider this question - what happens if you add 255 to a number?

As an example what is 7 + 255? Well, we know that there are 256 numbers on our number circle. So if we start at 7 and move round 255 places, we will almost complete the whole circle and arrive back were we started. But we will fall one short, arriving at 6 rather than 7. So, when we are dealing with bytes, adding 255 has the same effect as subtracting 1. We could say that binary 11111111 represents -1:

There isn't really anything magical going on here - all we are saying is that going 255 places clockwise has the same effect as going 1 place anticlockwise. We can continue this pattern. Adding 254 is the same as subtracting 2, etc.

This pattern continues as we count down: 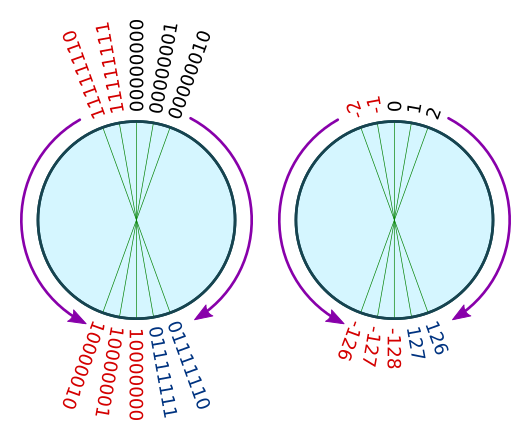 We have seen 2 different number circles. These represent signed and unsigned numbers:

Many languages give you a choice to use signed or unsigned values. You should use signed values for normal calculations, but you can use unsigned numbers if you definitely know that the values won't be negative.

{{% purple-note %}} You must not mix signed and unsigned values within the same calculation. Stick to one or the other. {{% /purple-note %}}

How would you work out the byte value of, for example, -33 denary?

We can verify this because, using byte arithmetic:

Why does this work? Well, look what happens if you add a number to its ones complement:

This will always be the case, because wherever there is a 1 in the original value, there will be a 0 in the ones complement, and vice versa. So the sum will always be 11111111. If we add 1 to this we get 0: